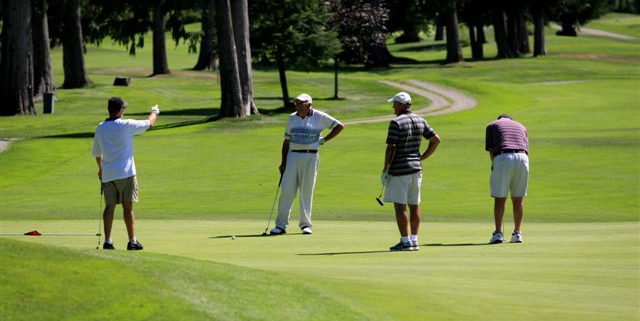 Once again, the dark clouds opened up and the sun poked through the dense early-morning fog, across the lake at Campbell County Park, and the rains stopped, and 130-plus golfers enjoyed coffee and donuts and teed off simultaneously at 9:00am on September 28 to compete for having the best time at the Annual Mentoring Plus golf outing at A.J. Jolly Golf Course.

After a week of rain, it was fitting to have a beautiful day where almost 200 people opened their hearts and wallets to support the disadvantaged teenagers who call Mentoring Plus their alternative family. It was also fitting that the winning team at 14 under par was a “ladies team” comprised of three women, Blaise Prost, Sarah Braun and Mary Watts and one gentleman, Irv Watts.  Two “men’s teams” tied for second at 13 under, and Joe and Gary Devoto’s team got the prize (a dozen Mentoring Plus good golf balls) via a card playoff.

Blaise also won the ladies’ longest drive contest, and Sarah won closest to the pin. Real golfers, I suppose.  Wayne Berryman won the men’s closest to the pin (on #8), and Brook Reeves won the men’s long drive on 11. All the winners were eligible to win the brand new Chevy Camaro convertible from Kelsey Chevrolet (for a weekend) and Danielle pulled Wayne Berryman’s name out of the hat!

There were two skins for the day (lowest score on a hole not matched by any other team) and both were worth over $300. One was won by Anthony Laup and his wife, Leslie, along with Ryan Turner and Adrian Cabrera. I believe it was a Birdie on the difficult par 3, #6, and the other was an Eagle on #18 by Skip Hicks, Milt Horner, Charlie Barr and Paul Winkler. The asterisk to that is that we sold “skirts” this year instead of mulligans, meaning that for $10 a man could tee off from the ladies’ tee, a sizable yardage advantage, and Milt Horner drove the green (from across the pond) and made a 30-foot putt for an Eagle 2.

Board Co-chair Ed Muntel (retired CEO of NorthKey Community Care) grilled hot dogs for lunch with Executive Director Chris Saunders and former ED Kevin Kennedy (retired supervisor for the Department of Juvenile Justice), with the help of volunteers like Joe Kling. There was an unlimited supply of beer, soft drinks and water to quench any thirst on the unusually hot, 85-degree day.

Texas Roadhouse again donated a wonderful barbeque and chicken dinner, and there were over 120 raffle prizes distributed to the golfers. Helping draw the raffle prize winners was M+ Alumnus, Danielle, who accepted the microphone and silenced the enthusiastic  crowd with her powerful story of her unfortunate adolescence, including having two children before the age of 16. She captivated the audience with her sincere appreciation for her non-judgmental “family” at Mentoring Plus, who gave her the new confidence she needed to secure a job and to find a place to live.

And the grand finale was drawing the winner of a week’s stay at David and Marcia Hosea’s beautiful cabin complex (over a dozen buildings) that sleeps 12 or more in the Blue Ridge Mountains of South Carolina, near Greenville and Clemson, which was won by Co-chair, Judge Mickey Foellger’s brother-in-law, Doug Schoepf. (Yes, there was a protest alleging some sort of nepotism fix, but trust me, Pure Luck.)

Meet our Newest Board Members

Get To Know Jack Moreland
Scroll to top