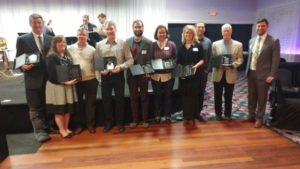 The Newport Business Association named its new officers, board members, and handed out honors to local businesses and individuals at its celebration in February.

“This kind of takes my breath away,” said City Manager Tom Fromme in accepting the Community Leadership Award. “The success we’ve had and the success we’re gonna have is because we all work together. This is truly a community-based award.”

City and county officials attended the event at the Syndicate, along with community members and local business leaders.

Kevin Kennedy, CEO of Mentoring Plus, was also honored with a Community Leadership Award, while Rachel Comte and Steve Mathisen were recognized as Volunteers of the Year.

Personal Stories Bring Hope, Healing in the Age of Heroin
Scroll to top