Mentoring Plus is entirely funded by donations and some private Grants. Funds have been generated by an annual Seeds of Hope Award Banquet in the Spring and an end-of-summer golf outing. (9/27/19 at A.J. Jolly golf course.) This year, M+ will also present a Music Festival at Southgate House with 18 to 20 acts, featuring the popular local party band, The Leftovers, and guests, veteran local recording artists, The New Lime, who were on Columbia Records in 1967 and had several charted singles on Top-40 radio air waves and were inducted into the No.Ky. Music Legends Hall of Fame in 2013, playing their last performance ever.

Special guests from Nashville will also be on the bill, including Mike Reid, former All-Pro Cincinnati Bengal defensive tackle, chosen in the first round of the NFL draft in 1970, who is also now a Grammy-winning songwriter, pianist and recording artist, having won Best Country Song for Stranger in My House, recorded by Ronnie Milsap, and Best Single for I Can’t Make You Love Me, recorded by Bonnie Raitt. Mike has also written over 20 #1 country music singles, including one he released and sang himself in 1991, Walk on Faith.

Also from Nashville will be Jeffrey Seeman, a slide guitarist who has released two recent solo albums on acoustic 12-string slide guitar, and was the electric slide guitar player for Wheels, a Cincinnati band with a successful album in the late 1970’s and backed up singer/songwriter Craig Fuller when he left Pure Prairie League, in the early days of country-rock. Seeman recently performed at the Ludlow Garage 50-year Reunion, and worked at Ludlow Garage as a teenager.

The concert includes G. Miles and the Hitmen playing R & B with the 20-piece NKU Big Band horns and the Dave Webster/Gary Devoto Band, Lost Henry, Electric Indigo, and the up and coming teenage band, Trauma Illinois, as well as NKU’s jazz combo and jazz guitars upstairs.

The back bar acoustic stage features the Bromwell-Diehl Band, with Elaine Diehl (formerly of the Biscaynes and WNKU) and Paul Bromwell, once voted the best rock guitarist in Chicago back in the 1970’s. Also on the acoustic stage are Ben Walz, his brother, Jake Walz, pianist/vocalist Cliff Adams, the all ladies’ trio, Raison D’etre, Carter New and the Diversions, a duo.

The event will be emceed by veteran DJ, Ernie “Fatman” Brown.

Tickets are $35/$40 day of show at ticketweb. VIP seats next to the stage, which include dinner, are $100 by contacting Mentoring Plus. For more information go to: mentoringplus.org or contact Mickey Foellger at 859-653-6772 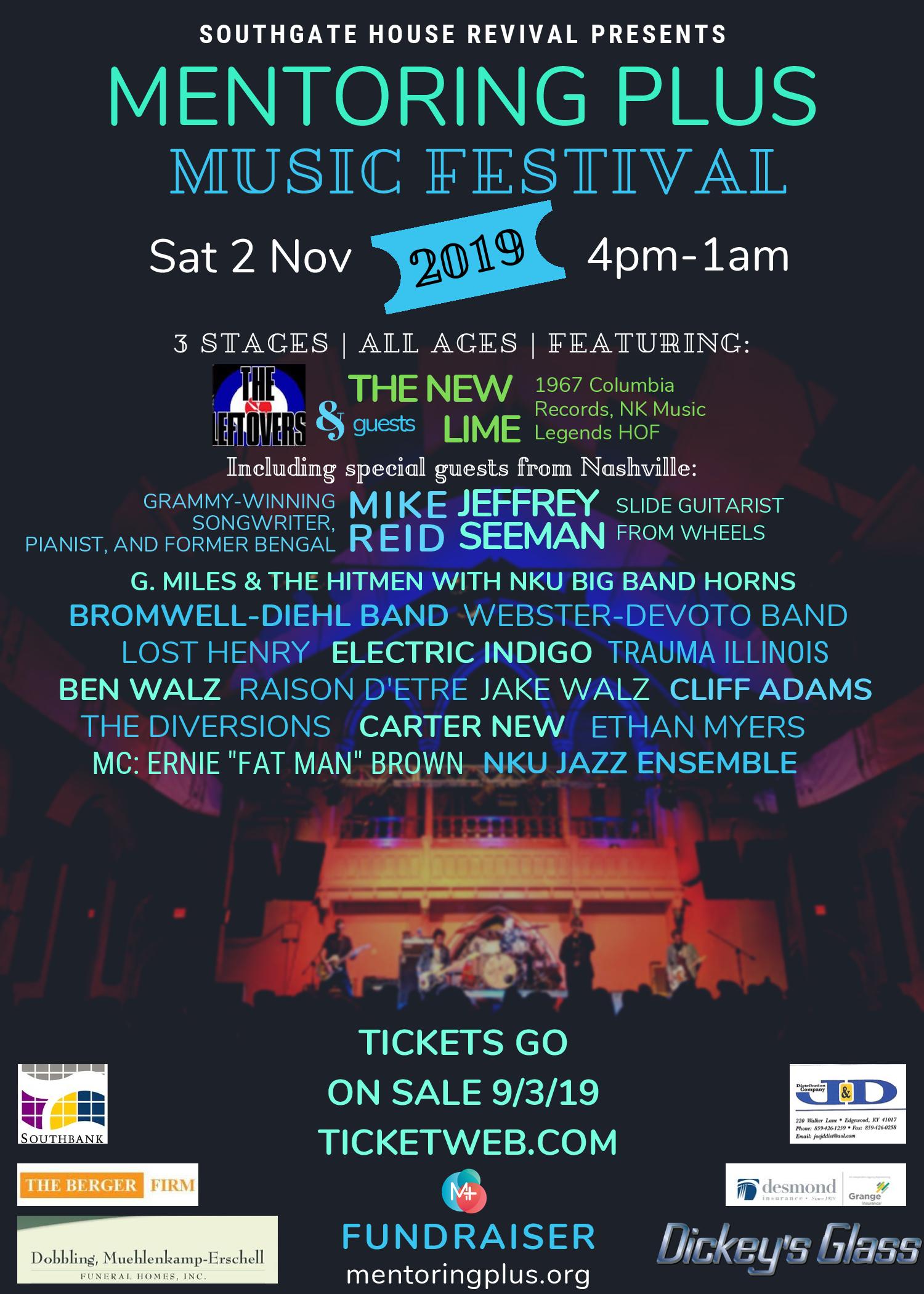